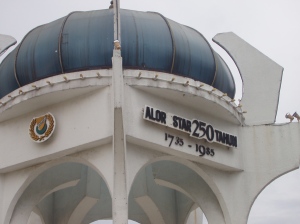 Alor Setar is the capital of the state of Kedah. The name derived from the activities concentrated on a small river tributaries which in Malay named as Alor. At the place there are Setar trees hence the combination of both names give the place her name Alor Setar. Its difficult to find the Setar tree nowadays. Back in 1982, the Sultan of Kedah Tuanku Abdul Halim Muadzam Shah planted the Setar tree at the town square opposite the Mesjid Zahir to commemorate the opening of the square and to symbolically represent the name of the town. But since the actual tree planted by the Sultan did not grow as expected and a replacement tree was planted. I took the picture of the actual tree a few days after it was planted but not sure where the album is after I transfered and work in Kuala Lumpur.

This monument was erected at the place supposedly where the Alor town was first born. 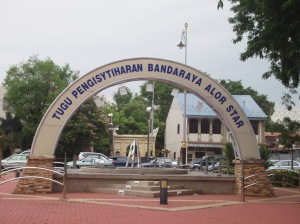 Monument marking the official declaration of Alor Setar town to city status in 2003. the building in the background is a two unit double storey building with a date on it as 1324. Maybe its one of the oldest building in Alor Setar. The unit on the left house Thean Teik Printer and is still in business. As far as I can remember the printing shop was there and until today.

Alor Setar is accessible by air, road and rail. Malaysian Airlines and Airasia fly daily to the town from Kuala Lumpur. Express buses also ply from Kuala Lumpur daily. From Penang one can go to Alor Setar on Transnasional and the service is povided hourly from morning till night. KTMB also connect the city to Kuala Lumpur.

The city centre revolves around the Setar Walk where Holiday Inn is situated. The hotel is on the same building of City Plaza, the most popular shopping centre in the city. Staying at The Holiday Inn , one can have easy access to the popular Pekan Rabu for local and traditional foodstuffs. A walking distance away around the Hotel are banks including Maybank, Bank Simpanan Nasional, RHB and CIMB. The Railway station is also situated just about 5oo metres away.

What you can do in Alor Setar?
Pekan Rabu is one place tourist must not miss. Mesjid Zahir, Balai nobat (where nobat musical instruments are kept) Clock tower, Balai Besar are all situated at the same location. Don’t forget the Menara Alor Setar for a birds eyeview of the city and on a clear day one can even see the Straits of Malacca. From a top the tower you can see the breathtaking view of the Kedah plain and know why it is called the Rice bowl of Malaysia.

Go to duty free island of Langkawi and travel into the legend of Mahsuri. The highest peak in Kedah is Gunung Jerai (1200 m) and feel some adventure going to the top. At the foot of the mountain on the south is Lembah Bujang, a historical site where it is believed the first Hindu settlement started. So if you are into history, do not miss this valley.

Shopping will usually be on ones itenary and if you want to buy football jerseys of any popular soccer team in the world or corporate uniforms of the F1 teams, drive up to the border town of Bukit Kayu Hitam, about an hour away using the PLUS Highway. Of course its not the original but imported from over the border and ad a glance nobody will say its imitation. Oh, you want to buy imititation apparels? Hmmmmm…..its individual taste and preference. Theres also a Duty Free complex at Bukit Kayu Hitam. See the online album here