Skip to content
While on my way back from Tiara Beach Resort in Port Dickson I stop by a roadside stall for a nice cooling coconut water. The stall grew up from just a small shack a few years back when I visited it. It is located at the entrance to Mess Greysands, Tractors Malaysia Bungalows and Port Dickson Beach Resort. From Port Dickson one has to drive past Telok Kemang on the way south. The stall is situated on the right. List of food served can be seen from the pictures below. 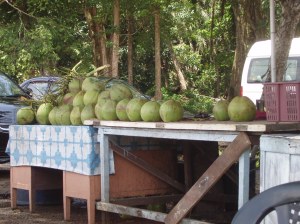 Nothing much better than a refreshing sip of coconut water and its soft flesh on a hot day.

Comments
Brazil striker Ronaldo was questioned by police after a run-in with three transvestite prostitutes he took to a motel.

The AC Milan star left an upmarket Rio de Janeiro nightclub with the call girls, according to police, but offered them about £300 each to leave when he discovered they were men.

Andre, who prefers to be called Andrea, says she has a receipt from Ronaldo of the purchase of three transvestites for Sunday night and also claimed the 31-year-old took drugs. Ronaldo admitted he knew they were prostitutes when they met on Sunday night, but did not realize they were transvestites until they got to the motel.

She posted a grainy video on YouTube which purports to show Ronaldo and also posed with car documents said to belong to the three-time FIFA World Player of the Year. Prostitution is not illegal in Brazil. However, according to reports in Brazil, he told a police officer he feared the episode could end his career.

Police chief Carlos Augusto Nogueira Pinto said: “Ronaldo’s testimony is more reliable. From zero to 10, I give his testimony a nine. “He was very excited and wanted to go out and have fun, without the press knowing. “Ronaldo said he is not good in the head and that he is going through psychological problems because of his recent surgery. “But he committed no crime at all, it was immoral at best.” The player is back in Brazil recovering from a career-threatening knee injury. Ronaldo released a press statement, saying: “In view of recent events and in order to clarify the athlete Ronaldo has never been a user of drugs, had no criminal complaint registered against him and is the victim of an attempted extortion.”