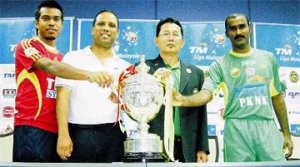 Tonight is the final of the 2007/2008 season. Kedah will be facing Selangor. Kedah is on the way of making a double treble after doing it last season. This is history in the making which will be quite difficult for another team to erase the record. Selangor was the first team to make a treble but was cut short from making it a double after Kedah took is away from them. Whatever it is in history, Kedah has already been in the lead with the tittles they have won. Its up to the team do seal the record in the history book of Malaysia sports.
The final will be played at the National Stadium in Bukit Jalil.