Skip to content
I was in Labuan from 20th – 24th April 2009 and took these pictures during my walkabout. It was on part of the town of Labuan. The first stop is the new Labuan Jetty. This jetty connects Labuan to Sabah, Sarawak and Brunei by sea. Ferries and speed boats depart from here to other seaside jetties at Kota Kinabalu, Menumbuk and Sipitang in Sabah. There is also ferries to Lawas in Sarawak besides to Brunei Darussalam. 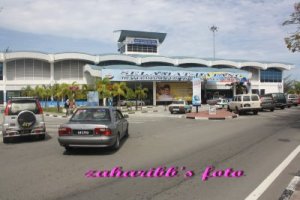 The main roundabout on the island. From this point roads lead into the town centre, the Western coast and up north. This roundabout is marked as number1 on the accompanied map taken from labuanweb.com. When I first step foot on this island, this is the place I arrived. There was a barber shop in front of where Hong Leong Bank is now (where the tree in the picture is seen). That was in 1975.

Below is another view from the roundabout. The building in the background is the abandoned Labuan Hotel.

Dataran Labuan akin to Dataran Merdeka in Kuala Lumpur is the main field in Labuan Town. 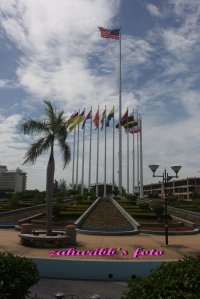 Dataran Labuan, and in the background is Ujana Kewangan, the largest shopping mall on Labuan Island. The building on the right is the Grand Dorsett Hotel.

A roundabout next to Dataran Labuan. The marlin has been chosen as the mascot for Labuan Island.

The public park along Jalan Bunga Kesuma. The place is shady with wakaf built for tired walkers to rest or take a nap. 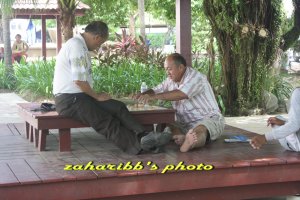 This is Victoria Hotel. I think this is one of the first hotel in Labuan since its name is derived from the name of the town. Labuan town was known Victoria Point before being known with its present name. The sign in the foreground is one of the pedestrian crossing along one of the main road. From my observation, drivers here are more courteous to pedestrtians. If they saw anyone waiting by the roadside to cross, drivers will stop voluntarily even there is no traffic light requesting them to stop. I have never seen this happens anywhere in Malaysia before. Something that other drivers elsewhere should learn.

The main bus terminal. Commuter can embark here and the bus lead to all areas on the island.