Skip to content
When I knew that I was going back to Kudat, I set up my objective to visit the northernmost tip of Borneo Island, the third largest island in the world. And my objective achieved. I went with a group of friends on one evening and had the opportunity to catch the sunset too. 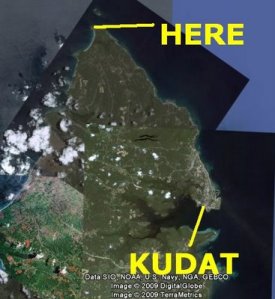 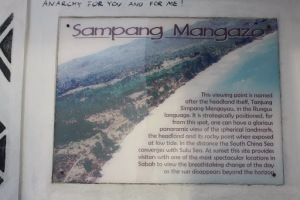 Thats the northernmost tip of Borneo

This is the tip. The rock at the tip of the Cape. Well, I dare not go to the end because its a bit slippery.

Just the proof that I have been here. 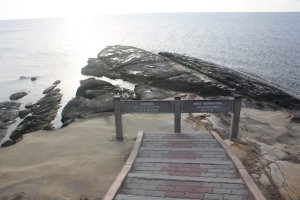 This is actually the farthest visitors can go. Going beyond this is at the visitors risk. I and my friends defy this notice and go down to the rocks down.

Just relax at one of the shelter sipping cool drinks while enjoying the cool breeze and the view of The Sulu Sea. 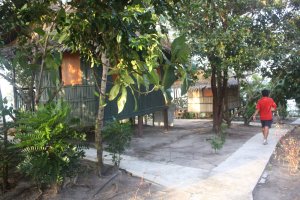 One of the huts at the homestay near Tanjung Simpang Mengayau. This hut can accomodate three person and is priced at RM 100 per unit.

Sunset viewed from Simpang Mengayau Beach
There are two good hotels in Kudat that is Hotel Ria (You Tube) situated in the town of Kudat and has internet access in the lobby. There is also a cafe on the ground floor with WiFi facilities. Another hotel is the Kudat Golf and Marina Resort located a bit out of town. There is a marina here and sailors can berth here. There is WiFi facilities at the lobby on the first floor and the coffee house on the groundfloor. For budget travellers on shoestring budget, there are some budget hotels in the town.

Like Loading...
It is a rare opportunity to be able to visit the south tip of peninsular Malaysia on the East coast. Maybe not the southern most (Tanjung Piai is the southern most) but coming to this part of the peninsular is a memorable visit for me. Its the end of the road on the eastern shore with KD Sultan Ismail as the landmark. Tanjung Pengelih is also one of the exit and entry point between Singapore and Batam Island of Indonesia.
Going to Tanjung Pengelih, one has to take the Kulai exit on PLUS highway and turn into Kota Tinggi. However signage is quite a problem because as far as I can remember there is only one signboard showing to where I was going- TLDM Tanjung Pengelih. It was before entering Kota Tinggi. After that there is only direction to Desaru. I missed the way twice. First I drove towards Kluang after missing the junction in Kota Tinggi town. Then again I was heading towards Kuantan for a few kilometres due to poor signages. When I asked the direction, I was told to take the Desaru direction.
After Kota Tinggi the next town is Bandar Penawar but take the route to Panggerang or Sungai Rengit. After that drive straight to the end.

The two pics above and below is of the clock tower on Jalan Tun Sri Lanang in KotaTinggi. You have to drive past this clock tower on the way to Tanjung Pengelih. This clock tower is located at Dataran Kota. On the side of the structure marks the water level (below) during the flood in 2007 that sumberged most of the town. 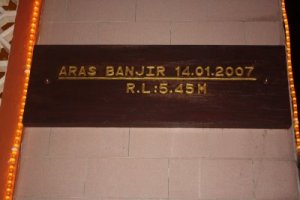 This is the end of the road. This point was used by the British as one of the defence point during the 2nd WorldWar to check the Japanese advancement to Singapore. There are still remains of the fort built by the British.

Picture above – one of the defence bunkers still that remains.