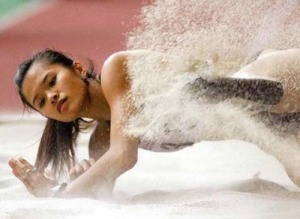 Track and field lost a national jumper when Ngew Sin Mei announced that she has to quit citing lingering knee pain as the reason. Sin Mei’s last competition was a during the Korat Sea Games in December 2007 where she bagged a silver for Malaysia.She has been undergoing rehabilitation since January and was back to the jumping pit in July in a bid to qualify for the Laos Sea Games at the end of the year.
She was quoted as feeling pain on both her knees during landing and time is not on her side to fully recover since the games is just round the corner. So she decided to call it a day.
Sin Mei also suffered an ankle injury at the 2005 Manila SEA Games and skipped the 2006 Melbourne Commonwealth Games. The injury aggravated during the Doha Asian Games in 2006 and that start bugging her dream to jump at the 2012 Olympics in London. She is now working as a fitness instructor and left her national 13.74 meter triple jump and 6.27 metre long jump records to be erased by her predecessor.
The Star quoted her verbatim,
“I am really sad that my athletics career has to end this way. I also feel sad that there are no other athletes to replace me in the triple and long jump events for the Laos Games.” This is yet another loophole created in the field of sports. Everytime when a top athlete decided to quit we have to wait for sometimes to get a replacement.
After heptathlon queen Zaiton Othman quits, until today we still do not have any replacement. The same goes to Decathlon when Hanapiah Nasir call it a day we are still waiting for another decathlete. We have Malik Tobias who made a debut at the Brunei SEA Games but then injury forced him to quit and go into coaching. There is also no century sprinter now after Watson Nyambek. Nazmizan Mohammad a double gold medallist in 2003 SEA Games in Hanoi too has to leave due to injuries. That alone in Track and Field. We also face the same problem in other sports. The question is, where’s the back up?
National Sports Council has a program call Pelapis programme. This programme was started a few years back with Sukan Teras and then absorbed into the Pelapis. It will take a few more years before this Pelapis athlete are ready to compete at higher level. We can’t produce athletes overnight and generally it takes about 8 years to produce a champion.
With the loopholes, it means that our base for athletes selection is not wide enough and training at the grassroot is not very successful as yet. Maybe we have learnt a lesson and now Ministry of Education with the cooperation of National Sports Council is grooming more qualified coaches to run their Sukan Prestasi Tinggi Sekolah project. However like athletes, coaches too need time to mature.