It was a simple but grand opening ceremony at National Sports Council’s Mini Stadium in Bukit Jalil.

Simple in the sense that there nothing too ceremonious but just made up of the normal sports opening ceremony with teams marching past, flag raising ceremony, lighting the cauldron and oath taking.
Beside being simple, the atmosphere was filled with electrifying grandeur. It’s the way the organiser, NSC presented it. So, opening ceremony need not be so glamorous and money munching activities but enough to entertain all present. Eventhough its not the 2 yearly event as the other Sukan Malaysia hosted by the states, but NSC had proven they can make it as grand as a more than two years preparation. 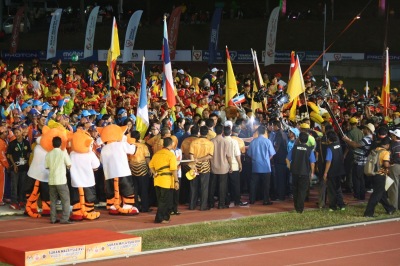 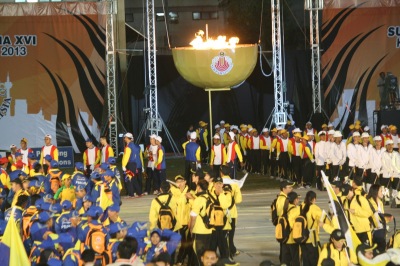 The opening ceremony was officiated by Deputy Prime Minister, Tan Sri Muhyiddin Mohd Yasin.
Sukan Malaysia XVI laid out 23 sports to be competed among athletes representing all the 14 states in Malaysia. Sports taking part are :
Water Polo, Sybchronized Swimming, Body Building, Handball, Netball, Basketball, Indoor Volleyball, Beach volleyball, Futsal, Beach Football, Equestrian, Gimnastic, Judo, Kabaddi, Cricket, Fencing, Rowing, Muay Thai, Table tennis, Rugby, Silambam, Softball and Woodball.
Venues are dispersed around Kuala Lumpur, Putrajaya and Selangor. The game will end on 7th July 2013.
Website for the game is hosted under National Sports Council’s webpage but I tried to access it but the page was not found.
I think when the official page could not be loaded, the ICT Department should launch Plan B tand use Social Media as a backup. Just create a Facebook Page in a matter of minutes and also a Twitter profile. In the age of ICT ways to get to the ground is very easy. As this post was written there is no social media activities for the game.