Why I put up the above notice is that whatever I share on this blog is based on what I read on the internet. Since the missing of MH370 is becoming more mysterious by day, more and more theories pop up and most from individual who wants to be anonymity maybe because they might not be officially with the investigation team.

I am sharing this pieces of information that I found while surfing the net.

Two U.S. officials tell ABC News the U.S. believes that the shutdown of two communication systems happened separately on Malaysia Airlines Flight 370. One source said this indicates the plane did not come out of the sky because of a catastrophic failure.

The data reporting system, they believe, was shut down at 1:07 a.m. The transponder — which transmits location and altitude — shut down at 1:21 a.m. ABC News aviation consultant John Nance said. More from  Source.

A US official, who spoke on condition of anonymity because he wasn’t authorised to discuss the situation by name, said the Boeing 777-200 wasn’t transmitting data to the satellite, but was instead sending out a signal to establish contact.

Boeing offers a satellite service that can receive a stream of data during flight on how the aircraft is functioning and relay the information to the plane’s home base. The idea is to provide information before the plane lands on whether maintenance work or repairs are needed.

Malaysia Airlines didn’t subscribe to that service, but the plane still had the capability to connect with the satellite and was automatically sending pings, the official said.

“It’s like when your cellphone is off but it still sends out a little ‘I’m here’ message to the cellphone network,’’ the official said. “That’s how sometimes they can triangulate your position even though you’re not calling because the phone every so often sends out a little bleep. That’s sort of what this thing was doing.’’ More from SOURCE 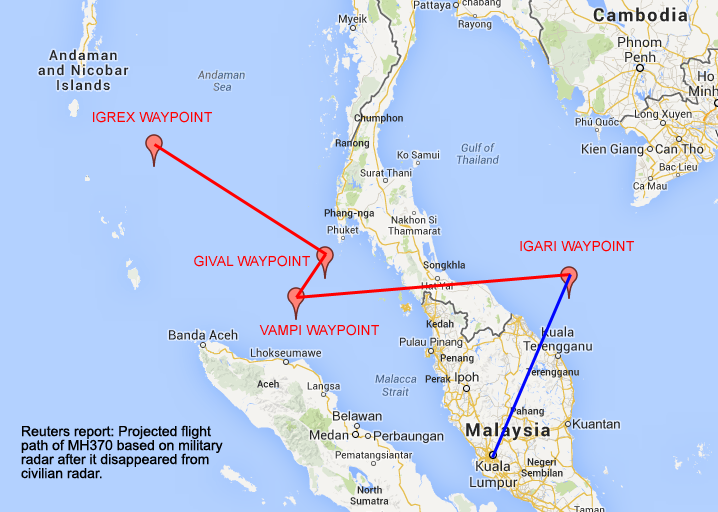 Two sources said an unidentified aircraft that investigators believe was Flight MH370 was following a route between navigational waypoints – indicating it was being flown by someone with aviation training – when it was last plotted on military radar off the country’s north-west coast.

The last plot on the military radar’s tracking suggested the plane was flying toward India’s Andaman Islands, a chain of isles between the Andaman Sea and the Bay of Bengal, they said.

Waypoints are geographic locations, worked out by calculating longitude and latitude, that help pilots navigate along established air corridors. More from SOURCE

Based on those unverified information there is still hope that MH370 and her passengers will be back with their loved ones. What more there are still no pings from the aircraft blackbox.

This video was posted on YouTube and thats puzzling. The puzzle is getting more puzzling. Just watch the video but please don’t make any assumptions speculations and conclusion.