Indian and Chinese towns can be found almost in every major towns and cities. This showed how determined people from these two descendants are willing to travel to search for greener pastures away from their comfort zones.

Kuching is not spared since there is a street dedicated to this community. Its the India Street in the heart of Kuching.

As the name implies, you can buy goods from Indian and Indian businessman along the road that has been turned into pedestrian mall.

For map of the location GO HERE

The distance of some towns in Sarawak from Kuching

Like Loading...
Mark your calendar for this coming June and July 2012 because there will be an atmosphere of cultural festivities from Sarawak, Land of the Hornbills,  in Kuala Lumpur. Spirit of the Harvest will be launched at Borneo Baruk Club in Jalan Kia Peng, KL (click for map) on the 28th April 2012 starting at  6.00 pm. It is to mark the launch of the Gawai Sarawak Festival. On June 30th 2012 the Spirits of The Harvest will be at Pusat Pelancungan Malaysia in Jalan Ampang, Kuala Lumpur. This will be organised by The Persatuan Warisan Sarawak Kuala Lumpur to promote the rich culture of the Borneo State to be admired by the rest of Malaysia and also to tourist.

What is Hornbill Festival? A Brief History
Hornbill Festival was first launched in September 2008 after several months of planning since the  formation of Persatuan Warisan Sarawak Kuala Lumpur in the late 2007.  Persatuan Warisan Sarawak designed Hornbill Festival to be a showcase of all the ethnic culture, tradition and values which make Sarawak a place like no other.
Hornbill Festival 2008 had strong support and participation from working adults and students alike, especially from UITM Shah Alam and University Malaya.  All of them brought an array of talents to make Hornbill Festival 2008 an inspiring showcase of Sarawak culture with a strong essence of Sarawak Unity. The people responsible for the smooth execution of Hornbill Festival are members of the newly formed Panggau Singai Events Management; Sarawakian through and through.
Then in 2009 Persatuan Warisan Sarawak had announced to organize a beauty pageant for Sarawakians in Kuala Lumpur during their Christmas and Chinese New Year Open House in January 2009.  Tight budget and limited resources caused Hornbill Festival 2009 to be shelved due to the priority given to the pageant competition Kumang and Keling Gawai 2009, in conjunction with the Gawai closing celebration, also called Gawai Ngiling Tikai which means Mat Rolling Celebration in Iban.  The rolling of mats symbolizes the end of an event in most dayak culture and it is worth a celebration of its own.  Thanks to Panggau Singai Events, the Kumang and Keling Gawai 2009 started a revolution in the appreciation of Sarawak Culture with an emphasis on the beautiful people of Sarawak.  Although Hornbill festival 2009 was shelved, there were more than enough dance performances that night to get the audience all excited about ethnic dance and culture. (Taken from HERE) 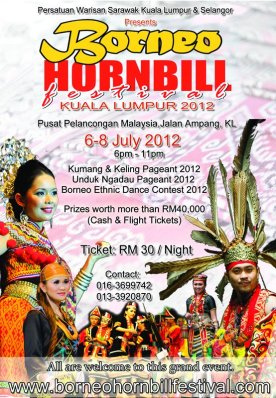 I was in Sibu again for another week. This time I stayed at Premier Hotel in the centre of the town. The reason being is that there is availability of Muslim and Halal food. The Tanah Mas food court is just in front of the hotel. The stall is open from morning till evening. However for dinner one can go to Sri Meranti Restaurant just across the road. The Sri Meranti is open until 4.00 a.m.

I did not travel around much this time since I’ve been to this Foochow town many times. My schedule was a bit tight this time or else I would live to travel up the Rajang again to Kapit. I’ll post pictures when I get back home.

Like Loading...
Harbour view hotel is one of the most convenient place to stay when you are in Kuching if you are looking for a cheaper alternative place to sleep. Located at Temple street it is near to the waterfront and market street where one can buy local Sarawak handicraft. I was told that the hotel is a favourite for visitors from West Malaysia and one must pre book because it usually full house.

There is also Free WiFi for guest and you can ask for the password from the reception. However during my stay I can’t get logged on to the network and the problem is with my laptop not the service I think. However since I subscribe to Celcom Broadband, I have nothing to regret about not being able to get connected to their network. The only thing is that Celcom’s signal is not very stable and speed is slow.

Rooms are with breakfast and I can tell that food is excellent and on a rating of 5 I can give 4.5. However there is not much choice for breakfast but with a hotel like it, what more can we expect.

Taxi’s is always available and if you want cheaper meals for your lunch or dinner, there’s a Malay restaurant just at the back of the hotel. Its Molly’s Place and serve excellent Malay food with a reasonable price. Five to ten minutes (depend on your walking speed) away is the waterfront, D place to hang at night. There’s food stall but price is quite expensive. Just sit and enjoy a glass of teh tarik. Read more here.

The single standard room with one single bed

If you are a night owl, nightlife is just five minutes away from the hotel. Cafes and Bistro can be found along the road opposite The Hilton. Walk out of the hotel and go left. Walk up the hill and the next junction is the place. If you are the kinky type, you might find transvestites as company (LOL) over there. 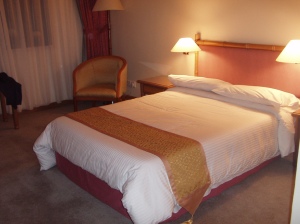 In December I visited Kuching again. This time it’s just a two night stay since I have to proceed to Kota Kinabalu after that.

While in Kuching I stayed at the Holiday Inn, my first stay here.